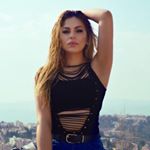 Architect by trade, singer-songwriter by passion-- Nadine Zureikat’s music is as carefully constructed and reliably sound as her building designs. Her voice moves seamlessly across genres, and her music creates a space for genuine connection between performer and audience. Her superpower is building an atmosphere for listeners to see what she has seen, and hear what she has heard.

Nadine is passionate about living in the now, and embodies the principle of “what you believe you can achieve”. She has spent over a decade in the musical realm, having performed her first original piano composition at the tender age of 10. She specializes in acoustic/folk/soft pop and EDM. Her music is characterized by flawless precision; the self-taught songwriter uses her keen architectural eye for detail to build the harmony, rhythm, structure and concept of each track.

Nadine’s first air-time came from New York Radio Station, which played her song “Holy Freedom” on rotation. The charming musician has been interviewed by international magazines as far flung as London, Texas and Chicago. Her songs have blasted through radio waves in Jordan, Canada, and several US states.

Debut EP “Sweet Escape,” which was written and composed by the 25 year-old artist, was released worldwide on all digital platforms in 2015. Remixes by Audiotrip & Reat Kay, Lawrence Wright, and Shannon McDowell have rocketed through charts globally. The EDM track and its slew of popular remixes broke into the Top 100 on Beatport Releases (#33), Trance Releases (#45), and House Releases (#70). On RDIO it landed at #2 Best Album Charts in Switzerland and #8 in France.

This ambitious performer is poised to conquer the musical world through hard work and passion. When she is not writing and composing her next big hit, Nadine can be found dancing through the soulful garden of creativity. Her music is a rallying call of inspiration and motivation to those adventurous souls seeking to experience their aliveness in the creation of the moment.

Demographic data for @nadinzureikat's audience is available for free to influence.co users.