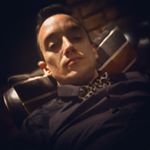 At age 11, he began his professional career in "El club super 3".
With 15-16 years he presented the contest "Quina sardana es?" Within the program "Contrapunt" on TV Sant Andreu in Barcelona.
At 17 he left for Madrid and with 18 filmed a sequence of the film "Torrente, el brazo tonto de la ley".
From here the career of Jose Garcia went to more. He has been through Canal 9 of collaborator-reporter in the program "La naranja metálica" a few years later, was contracted several times for "El Terrat" giving life to the personage of "The Pupas" in Buenafuente next to Berto Romero among others.
We have seen him in Kubala, Moreno i Manchón, series of maximum hearing in TV3 (Televisió de Catalunya) and "El Crac" next to Joel Joan. It has been through the series Aida like "Higinio" boyfriend of Paz in its last chapters.
More than 10 short films are what he has in his back as an actor, we can highlight "Bujías y Manías" where he was hand in hand with Canco Rodriguez ("Barajas" Serie Aida).
He has been one of the protagonists of the webserie "Scalletti: Girona Connection" where he gives life to Joan Vicenç Aimerich i Palomero, a policeman patoso but very endearing.

Several video clips are in which he has worked, with groups such as iaia, manel, etc ...

Several projects have come to light or are about to do, such as the films "Barcelona 92" where he will give life to David, the movie "Losers". And in the short film "Vida" a challenge for him, since he played a young cancer patient.

In theater has been directed by Paco Moreno in the work: "U-bahn"

Demographic data for @jgarciaactor's audience is available for free to influence.co users.