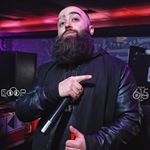 DJ Wrightful officially started in the music industry in fall of 2010 when he began classes at The Art Institute of Tennessee-Nashville. He has been going strong ever since then.

He is a recipient of a Bachelor of Arts in Audio Production, a Southern Entertainment Award for Slept On DJ of the Year in 2016 & an Impact Award in 2018, nominations for Music City Hip Hop Awards, Southern Coalition Movement Awards, and Salute the DJs Awards.

DJ Wrightful currently services the music industry in multiple ways.He is the CEO and Program Director of 615 Radio, a tour DJ with multiple artists, a consistent mixtape DJ with multiple series, he DJ’s in multiple clubs in Tennessee, he works as a recording, mixing and mastering engineer, and he also works as a mobile DJ and live sound engineer.

Demographic data for @djwrightful's audience is available for free to influence.co users.