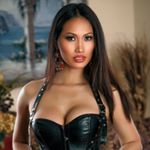 Angie Vu Ha is a model, actress, DJ and producer. She is best known as “Asia’s Sexiest DJ” and was given an award for Number 1 Female DJ by the prestigious Top 10 Asia and ranked the sexiest DJs in the world by The Sun Las Vegas. America got to know Angie Vu Ha on the Season 10 of America’s Got Talent with Nick Cannon.

More than just a good looking face, Angie stepped in the studio and produced 5 singles Cookies, Cream, Cyber Sex, So Damn Hot and Brixton Electric released on Beatport . Her first single Cookies, which gained instant support from BBC Radio 1's Judge Jules, Marco V, Lisa Lashes, and Michael Woods. Cookies became one of the fastest selling tracks on Beatport. Her second release Cream gained the support from Gareth Emery and Marco V. You can hear Cream play on Ministry of Sound radio from Adam K.

Angie's latest track Obliviate with Futuristic Polar Bears and Cuebrick is in Top 10 Beatport Charts peaked at No.5.

Demographic data for @angievuha's audience is available for free to influence.co users.