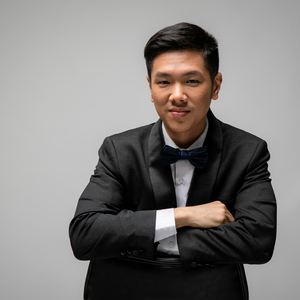 Hailed as a “complete musician – a sensitive artist and an extremely talented young pianist”, Congyu Wang is an internationally renowned soloist who has garnered acclaim as a recitalist, accompanist and chamber musician.
​
Born in Singapore, Congyu Wang started playing the piano at the age of 3. He was selected for a scholarship that enabled him to attend the prestigious Ecole Normale de Musique de Paris, where he studied with renowned French pianists Jean-Marc Luisada and Odile Catelin-Delangle. He later enrolled in the Schola Cantorum (Paris) to continue his studies with Gabriel Tacchino (who had been Francis Poulenc’s only student). Ever since youth, Congyu Wang has enjoyed phenomenal success in international piano competitions, ultimately winning the Grand Prize in Berlin and Bordeaux. His other prizes include Vulaines-sur-Seine, Lagny-sur-Marne, Merignac, Paris, Jakarta, Tallinn and Cle d’Or Reunion. He was featured in the national news journal ‘Zao Bao’ as Singapore’s most promising young artist of the year in 2016.
​
At the Chopin International Piano Competition for Young Pianists in Slovenia, Congyu was awarded 6th Prize. One of the jury members, François Weigel, believed he should have won, and resigned thereupon in protest. Congyu Wang has since made appearances in over 800 recitals in France, England, Italy, Spain, Portugal, Belgium, Switzerland, Germany, Croatia, Estonia, Finland, Sweden, Latvia, Mauritius, South Africa, Reunion Island, China, Thailand, Indonesia, Malaysia, Singapore and other countries.
​
Highlights of some of his performances include festival appearances at Château de la Verrerie (France), Ernen Music Festival (Switzerland), the Geza Anda Piano Festival Masterclasses (Berlin), the International Isang Yun Academy (Paris), International Hammer Klavier Piano Series (Barcelona), International Piano Festival (Amarante), Festival Langtang (Reunion Island) and Chopin Fest (Belgrade). Congyu Wang has performed for many important guests internationally – Celebrities, Bankers, Diplomats and Ambassadors including the Prince of Brunei, the Prime Minister of Singapore, Ambassadors and Consular of France, Singapore, China and Norway.
​
Congyu Wang has earned a reputation for delivering stunning performances of extremely demanding repertoire. His vast repertoire includes 30 piano concertos, along with the complete solo piano oeuvre of Chopin and Poulenc. Congyu Wang has shared the stage with many well-known musicians, such as Roman Leuleu, Agnes Kallay, Giancarlo de Lorenzo, Elena Xanthoudakis, Grigor Palikarov, quatour arsis etc.
​
In 2015 Congyu Wang published his first album ‘Charme’ on KNS classical featuring the works of Francis Poulenc to international acclaim. Recently he released his second album ‘Reflets’ dedicated to Claude Debussy commemorating the 100th death anniversary of the French Composer. His recordings are frequently broadcasted on radios internationally – France Musique, BBC radio 3 (UK), Radio Vie (Reunion), Radio Antena 2 (Portugal), Classic 1027 (South Africa), Symphony 92.4 (Singapore) etc.
​
In 2019 Congyu Wang was featured on the movie ‘Une Barque sur l’Ocean’ directed by French director Arnold de Parscau.