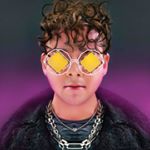 Velvet Code is back to "Break The Silence".

Conceived in New York City during the hot summer of 2007, Velvet Code quickly gained industry notoriety touring with the popular electro-punk band, Mindless Self Indulgence. Produced by industry legend Mark Saunders (Shiny Toy Guns, Erasure, The Cure), Velvet Code’s debut synth-infused pop album Black.Blue.Blind. quickly garnered accolades from the likes of Perez Hilton, Hype Machine among others. In 2009, Velvet received the plaudit of “Dance/Electronica – Song of the Year” at The 8th Annual Independent Music Awards for the song “Say You Love Me.”

In 2013, Velvet released “Get Outta My House” which appeared on the Billboard Dance Music Charts for 15 weeks and peaked at #19.
After spending time writing and producing for other emerging artists, Velvet Code has returned to the studio in 2018, collaborating with Wendy Starland (Lady Gaga) to write and record his sophomore album. “Break The Silence”, is a confident follow-up to his breakout hit, “Say You Love Me”, packing bark and bite in equal measure, complete with driving beats and a refrain that will undoubtedly be sung aloud by millions across the globe.