Last year when Andrew Kamphey built the first CreatorScape, it was dominated by influencer marketing companies many of which were really agencies specializing in influencer marketing. That reflected the nascent and experimental stage the industry was still in. When we proposed working with Andrew to put together the 2020 update, our hope was to accurately capture the emerging diversity we saw and to highlight the growing volume of companies supporting and making a business from the creator and influencer industry. This year the CreatorScape has 284 companies in 15 categories (none of which are agencies) and shows how the ecosystem has developed. 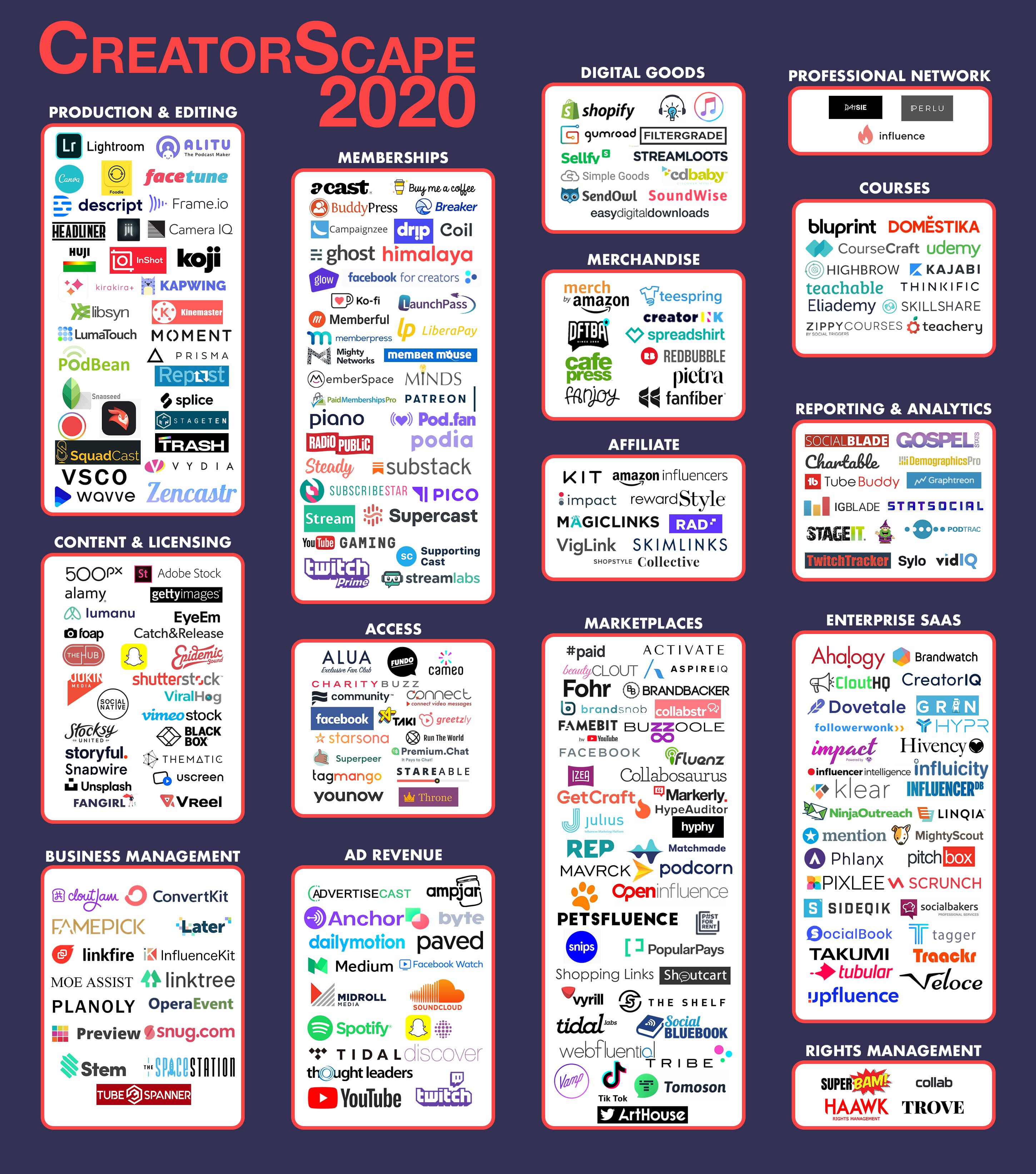 As we put this together with Andrew, it became clear that many companies in - or entering - the creator industry had roots in other areas like social media or production editing. While it was amazing to see so many companies signal the influencer and creator industry as interesting to spend time on, we were hoping to capture as much of a purist view of the space as possible. We decided we needed a simple rule set for how to include or not include companies.

Here are the rules we used to decide what companies were in the CreatorScape and which were not (for now!)

While we think we came up with the right set of rules, the problem with rules is that the world is grey and imperfect. In the end we made a few judgment calls necessary to keep some coherency to the story we saw emerging and wanted to tell. It's a simple story but an awesome one - the influencer and creator economy is here, it's growing like wildfire, and it's not going away.

We also took some time this year to reorganize our categories. What we saw happening was a clear alignment between companies and the workflow of a creator. First there is production. There is a lot more that goes into making content than many think. From capture to post production, especially with multi-person and distributed teams, there is a lot of focus on this part of the process. Next there is monetization which is proving to be fertile ground for companies who can take advantage of the incredible virality that comes with having customers who are influencers and creators and need to promote those products to their audiences. Lastly we added business management. As the inevitable admin of turning a hobby into doing something for a living creeps in, the need for influencers and creators to run themselves like business has emerged as a new theme this year. We organized the 2020 CreatorScape into roughly those three buckets.

So, without further ado, let us present to you the 2020 CreatorScape. This could not have been possible without the highly detailed research and laborious graphic design efforts of Andrew Kamphey. We also had a lot of help from VCs, industry experts and press friends who gave us some feedback on early versions which was formative. For those that love data, all the companies mentioned in the CreatorScape 2020 (along with websites and social links are listed below) we have also included a link to a spreadsheet with all the data.

We see nothing but an upward trend for 2020 and we expect the 2021 CreatorScape to have at least 2x the companies in it. Please send us any questions, corrections, press inquiries or concerns to [email protected] .