Exploring the Code of Courtesy in the Age of Social Media

It has been 15 years since the launch of Facebook, 13 years since the first tweet on Twitter, and nearly 10 years since Instagram was founded. The top three social media platforms may have once had the goal of bringing people together, but a decade later, feeds once covered in status updates are now polluted with advertisements and luxury imagery that provokes insecurity, causing users to believe their life experiences pale in comparison to those around them.

With society evolving on and off the screen, what behaviors are appropriate for the world to see? We surveyed nearly 1,000 people who had used one or more of the biggest social media networks in the last three months to get a better idea of what’s appropriate online. Keep reading to see which unspoken rules you may be breaking. 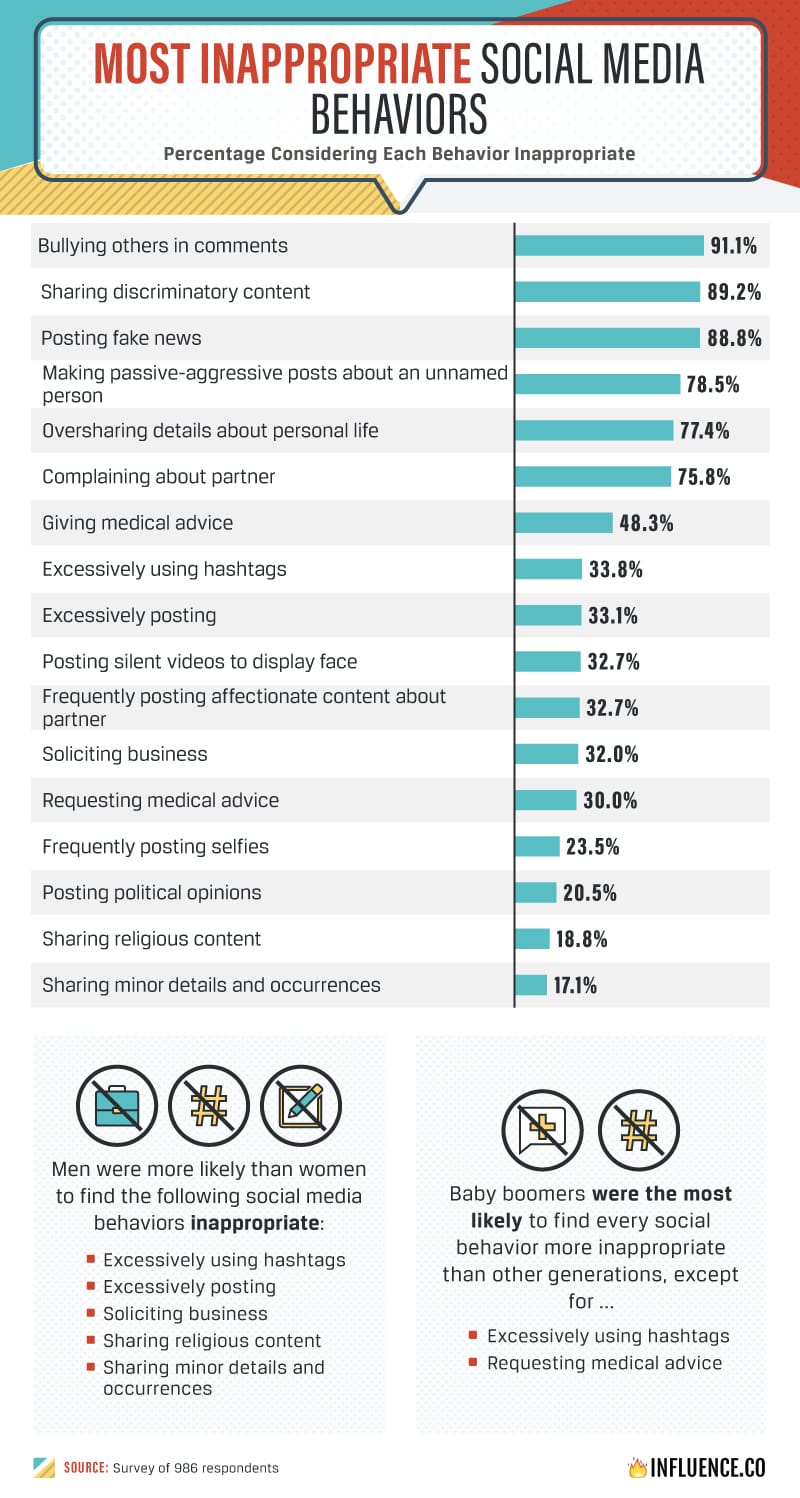 It doesn’t take long to find derogatory remarks, threats to safety, or very blatant harassment on social media – just take a trip to any celebrity or influencer’s page. Despite social media platforms like Snapchat detailing anti-bullying policies and taking steps to protect users from abuse, comment sections are a playground for cyberbullies. While zero-tolerance policies are standard across most networks, bullying others in the comments was the most inappropriate behavior (91.1%), according to respondents.

Sharing discriminatory content and posting fake news was also highly unacceptable to the majority of people. However, only 20.5% of respondents thought posting political opinions on social media was inappropriate, while 18.8% and 17.1% thought sharing religious content and minor details, respectively, should be avoided.

While women and millennials have more of an online presence than their respective counterparts, men were more likely than women to think excessive hashtag use, excessive posting, and soliciting business were more inappropriate. On the other hand, baby boomers were most likely to find every social media behavior inappropriate, except for excessive hashtag use and requesting medical advice. 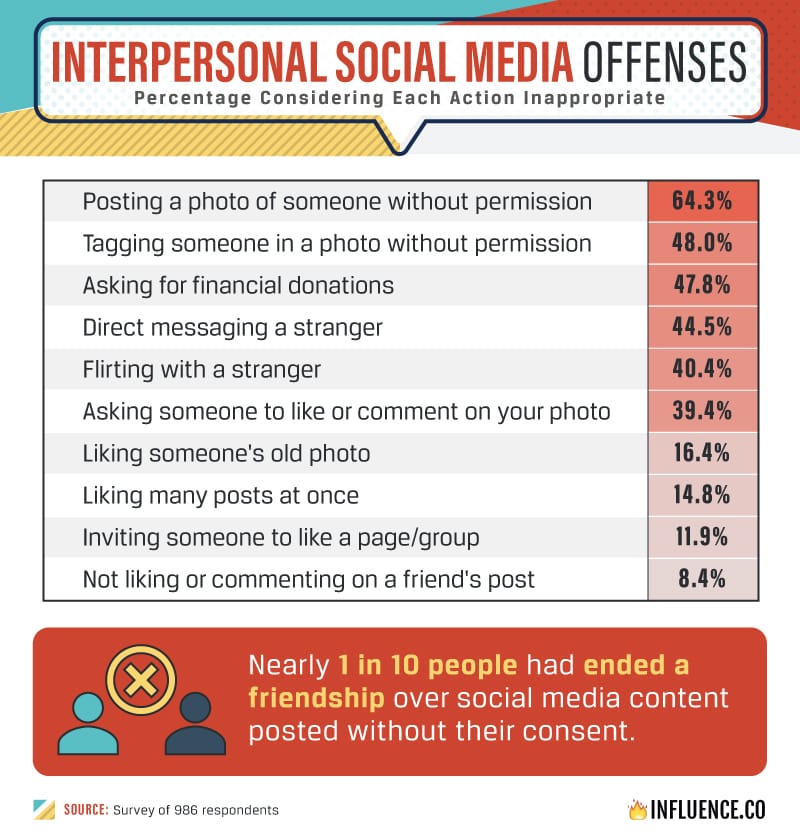 Posting on social media has become a very selective and personal process, making users vulnerable to offenses. Posting a photo of someone without asking was, by far, the most inappropriate offense, with 64.3% of respondents saying so. Going one step further and tagging someone in a photo without permission was also considered highly inappropriate, followed closely by asking for financial donations.

To save users the awkwardness of asking to remove a tag from a photo, Facebook provides the option to review tags, allowing people to accept or reject the post on their page. As for asking for money, the social media giant has attempted to turn a negative into a positive – rather than reaching out to friends and followers for financial donations, Facebook has added a birthday charity feature, one that philanthropic users may respond to better than requests for handouts.

Regardless of the offense, however, social media behaviors can end friendships. Nearly 1 in 10 people had ended a friendship over social media content posted without their consent. While it may seem harmless to post a picture with friends or family without checking with them first, it can wreak havoc on relationships and may even qualify as copyright infringement. 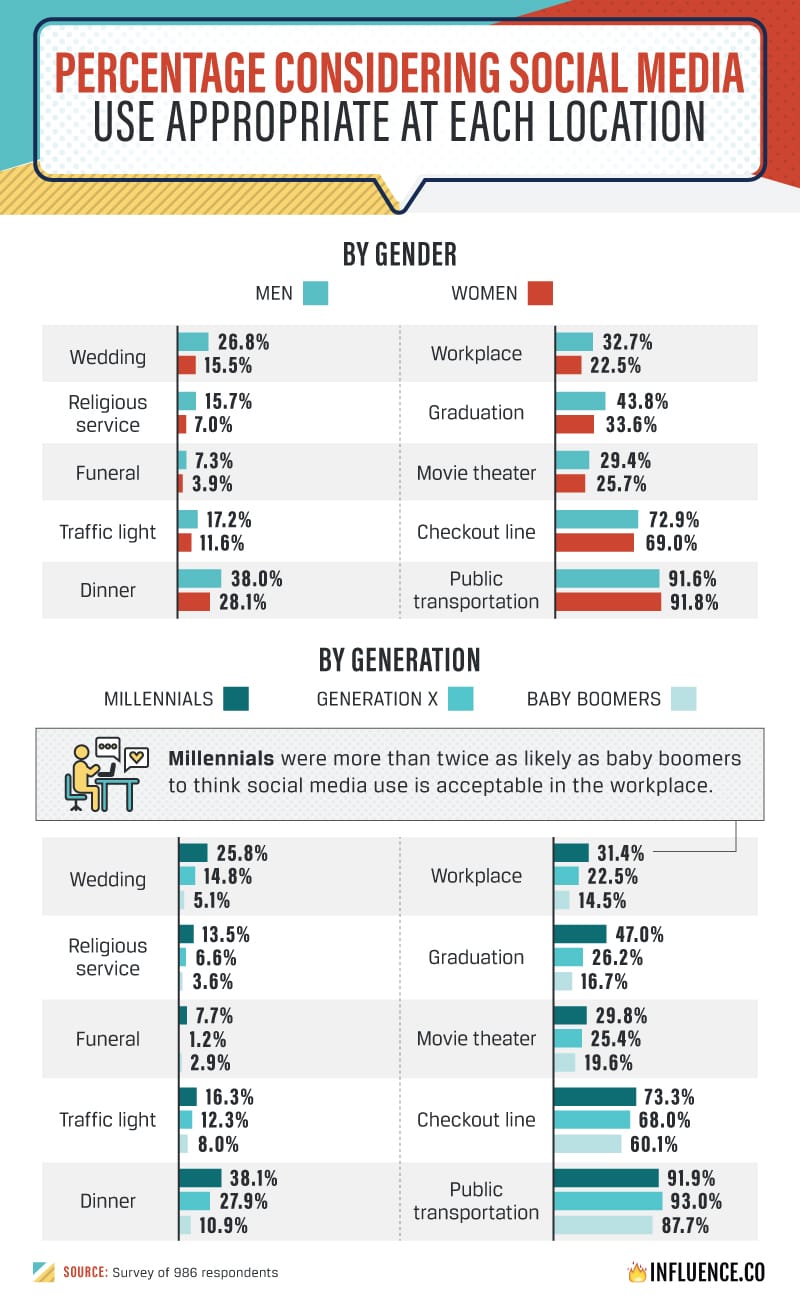 As with many other topics, men and women don’t always see see eye to eye on the appropriateness of social media use. Aside from being active on social media while on public transportation (in which over 91% of both men and women thought is acceptable), men were more likely to think social media use was appropriate in every other situation. Compared to 15.5% of women, nearly 27% of men thought it was OK to pull out their phone and hop onto social media during a wedding. Similarly, men were 10 percentage points more likely to think social media was acceptable while dining with friends, attending a graduation, and working.

Larger generational differences reveal just how much times have changed. Across nearly every situation, including funerals, religious services, and weddings, millennials were the most likely to think social media use was acceptable. Baby boomers, on the other hand, were significantly more conservative with their use – aside from checkout lines and public transportation, less than 20% of baby boomers thought social media use was OK in every situation.

Considering millennials have spent the majority of their life on social media and are addicted to their mobile phones, it makes sense that the youngest generation is notably more accepting than its older counterparts. 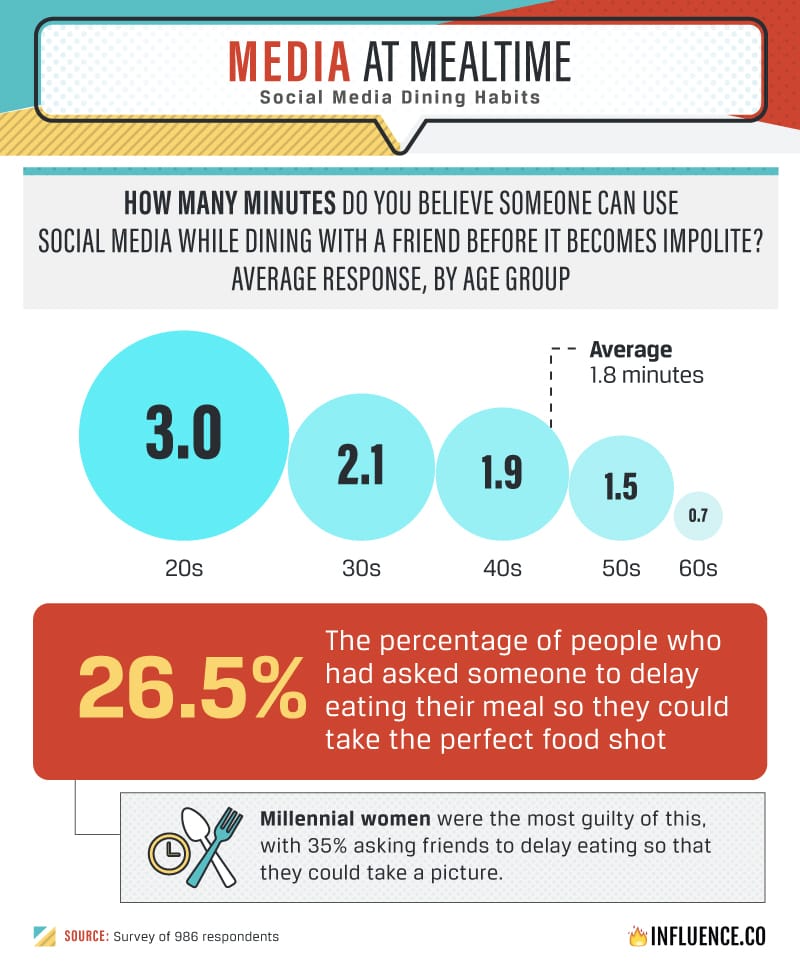 Using social media while dining with friends may not be overwhelmingly frowned upon, but posting pictures of food has users walking a very fine line. Quickly snapping a photo or scrolling for a minute may not seem like the end of the world, but if you can’t shoot and upload the pic within three minutes, your dinner guests will likely be irritated.

Despite the risk of offense, 26.5% of people had asked someone to delay eating their meal so they could get the perfect food shot. And considering the majority of millennials feel the need to document their meals before enjoying them, it’s not surprising that millennial women were the most guilty of asking friends to delay eating for the sake of a post. 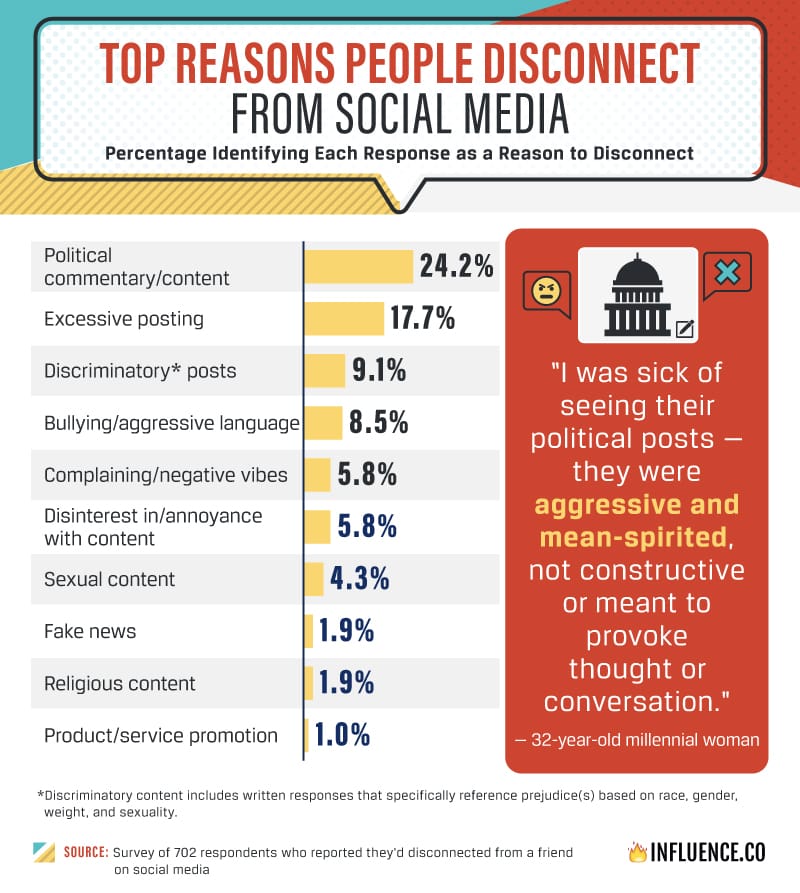 Following the written rules of social media platforms can prevent you from having your content deleted, account suspended, or even banned. While breaking unwritten social media rules won’t result in total loss of your profile, it could result in some people hitting the “unfriend” button. Seventy-one percent of respondents reported they had disconnected from someone on social media due to their actions on the platform. The topic most likely to come between social media relationships also comes between those with real-life connections: politics. Nearly a quarter of people had unfollowed or unfriended someone on social media due to political commentary and content, while 17.7% had done so over excessive posting. Discriminatory posts, bullying, and complaining were also pretty high on the list of last straws, but fake news, religious content, and selling products were significantly safer.

Social media set out to do one thing: bring people together. And while this has largely been accomplished, our motivations for participating in social media culture continue to evolve. However, the digital world has also led to not-so-positive behaviors, where people can say mean things without showing their face, discriminate with little consequence, and spill details nobody truly wants to hear.

As part of a social network, it is up to users to act accordingly. Whether it’s cutting back on posting, using kinder words in comments, or resisting the urge to snap a photo before every meal, it’s vital for people to remember that social media is meant to bring people together and that our online behavior can quickly come between us.

Knowing the unwritten rules along with the tools of the trade can not only save you from losing friends but also it can take your profile or business to the next level. At Influence.co, we’re here to help influencers, brands, and agencies make the most of social media so that they can connect and grow. To browse campaigns, compare rates, or learn more, visit us online today.

We surveyed 986 respondents who reported using one or more of the following prominent social media networks in the last three months: Facebook, Twitter, Instagram, Snapchat, and Reddit. Respondents reported ages of 20 to 71 with an average age of 38 and a standard deviation of 12 years. Of the respondents, 59% reported as female, and 40% reported as male. Remaining respondents identified as nonbinary. As results are based on user-reported data, they are limited by respondent bias.

There are just some things you shouldn’t do when it comes to social media, but sharing this project is not one of them. We grant you permission to share the graphics and content found here as long as it’s for noncommercial purposes. All we ask is that you link back to this page so that the authors receive proper credit for their work.