Whether you're scrolling through Instagram, looking up a new recipe on Pinterest, or watching a funny video on YouTube, you likely can't escape the impact of influencers. No matter what you're into – beauty tutorials, fashion advice, travel, or video games – the prevalence of influencer culture probably hasn't escaped your notice. While influencers exist across many niches today, they've also formed their own industry, estimated to be worth $15 billion by 2022.

Social media influencers have changed the way companies big and small think about advertising their products and services, and the profit many make is not to be ignored. With the right audience and brand deals, your social media presence could be worth six figures per post. With so much money on the line, it's no wonder so many people are still looking for a way in.

For a closer look at what it takes to become an influencer, and how many people are still trying, we surveyed over 800 internet users and 69 influencers. While about 2 in 5 people have considered trying to turn their social media game into a cash-producing enterprise, only half have tried to put their plans into fruition, and even fewer have been successful. Here is what we discovered about the perceptions (and misconceptions) of what it takes to become a social media influencer.

From the outside looking in, it's easy to suggest that taking pictures and shooting videos for your online profile isn't exactly the definition of a "real job." In reality, while the title of social media influencer isn't the conventional entry on a resume, there's a genuine amount of work that goes into curating, editing, and managing content on a full-time basis. With nearly 1 in 5 Americans admitting to buying at least one thing in the past year because an influencer recommended it, what these social gurus post, how it looks, when they share it, and how they engage with their audience are all determining factors in the profitability of their content. 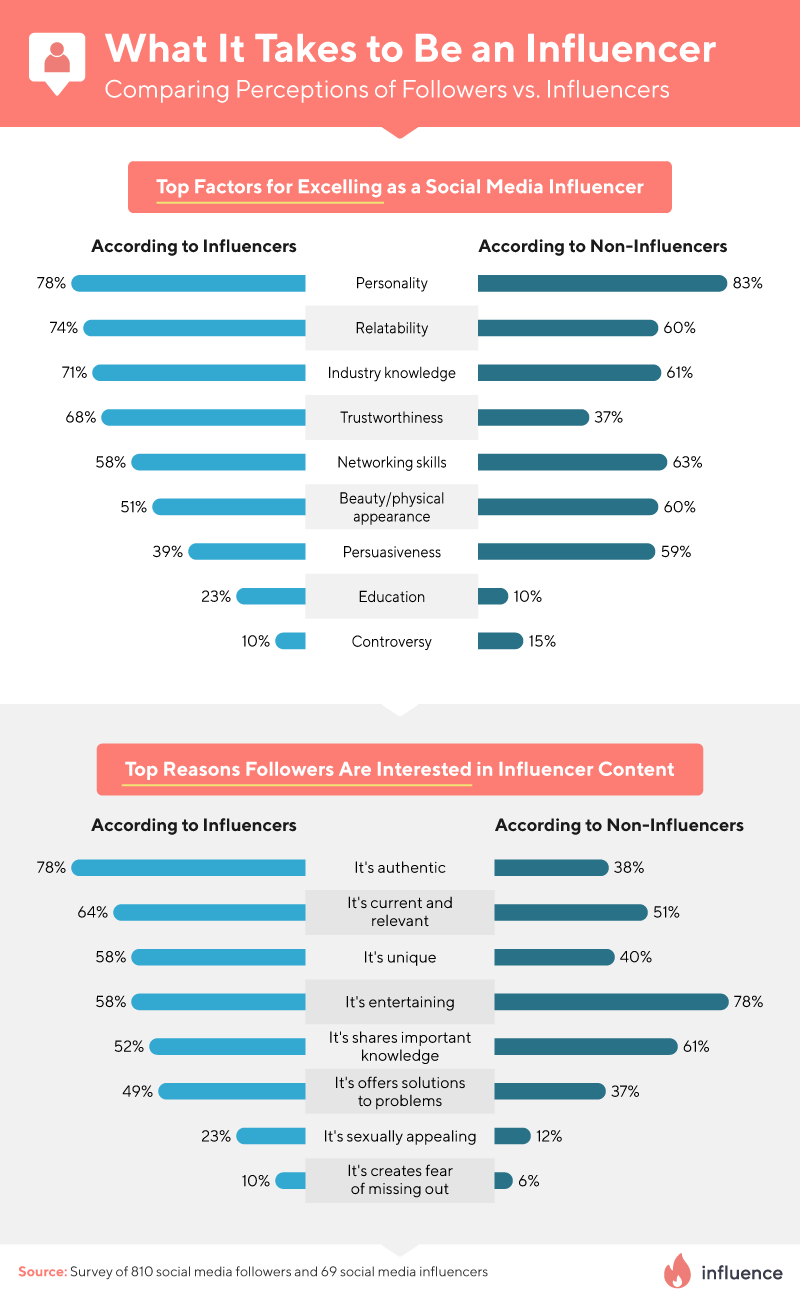 When asked which factors they believe play into becoming a successful influencer, the average user might be missing the mark. While personality was the most commonly guessed component of achieving influencer status, real-life influencers indicated that relatability (74%), industry knowledge (71%), and trustworthiness (68%) are far more important than many people realize. In contrast, your ability to network, appearance, and persuasiveness are less of an indicator of whether you have social marketability.

Of course, nothing you do matters if you don't have followers interested in the content you're producing. So, what are users really looking for in the oversaturated social space? According to the influencers polled, authenticity (78%) is crucial, followed by relevant content (64%) that's unique and entertaining (58% each). Ultimately, if you're looking at what's already been done as a primer for success, you might be disappointed in the results.

When asked what they think an influencer's life looks like behind the scenes, respondents estimated that social media gurus spend 38 hours every week cultivating their brands. In reality, the influencers we talked to worked on their content for 22 hours a week, on average – 16 hours less than expected. 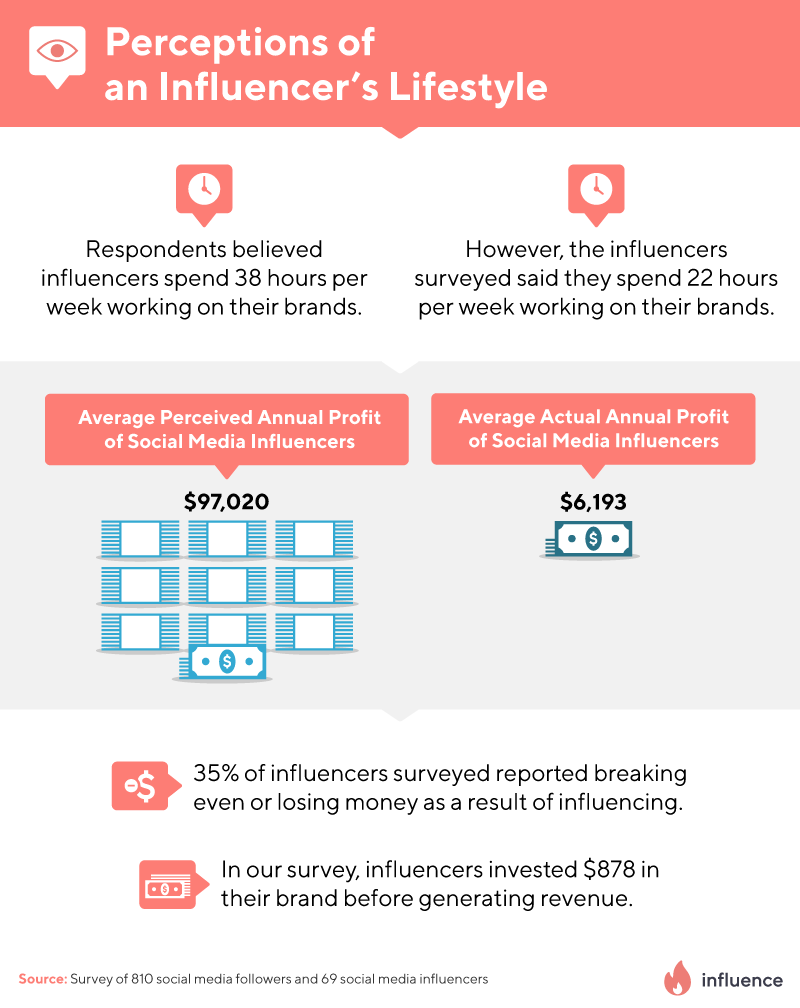 Some big-name accounts might be pulling in major paychecks for their efforts, but that isn't necessarily the norm. More than 1 in 3 influencers said they are either breaking even or losing money in their efforts, and their initial startup costs were about $880, on average. And while most users expected the average annual profit of social media influencers was over $97,000, the influencers surveyed reported incomes of far less, roughly $6,200 per year. 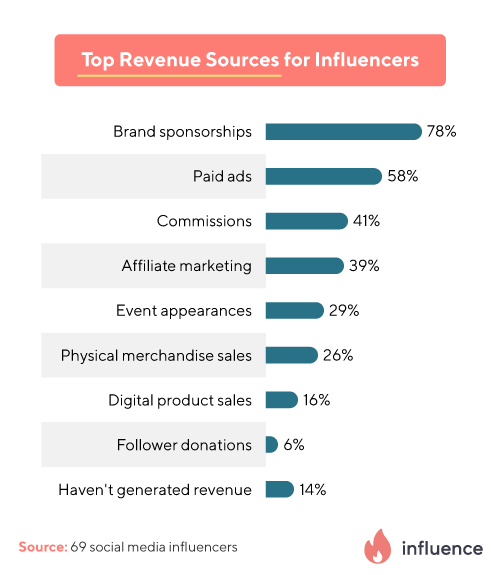 Affiliate marketing and paid ads are one thing, but the bread and butter of influencer income come from one place: brand sponsorships. According to the influencers polled, nearly 4 in 5 identified brand sponsorships as a primary revenue stream, followed by paid ads (58%), commissions (41%), and affiliate marketing (39%). Even if you don't have a massive following yet, one report indicated that brands spend roughly 40% of their influencer marketing budgets on "micro-influencers" compared to celebrity accounts.

Stay in Your Lane

The influencer marketing game may still be relatively new, but more traditional marketing practices still apply. More than almost anything else, social media accounts looking to make a splash need to be very familiar with their audiences. In a digital world overflowing with paid subscribers and bot accounts, genuine engagement is one of the crucial differentiators between actual influence and posts for hire. 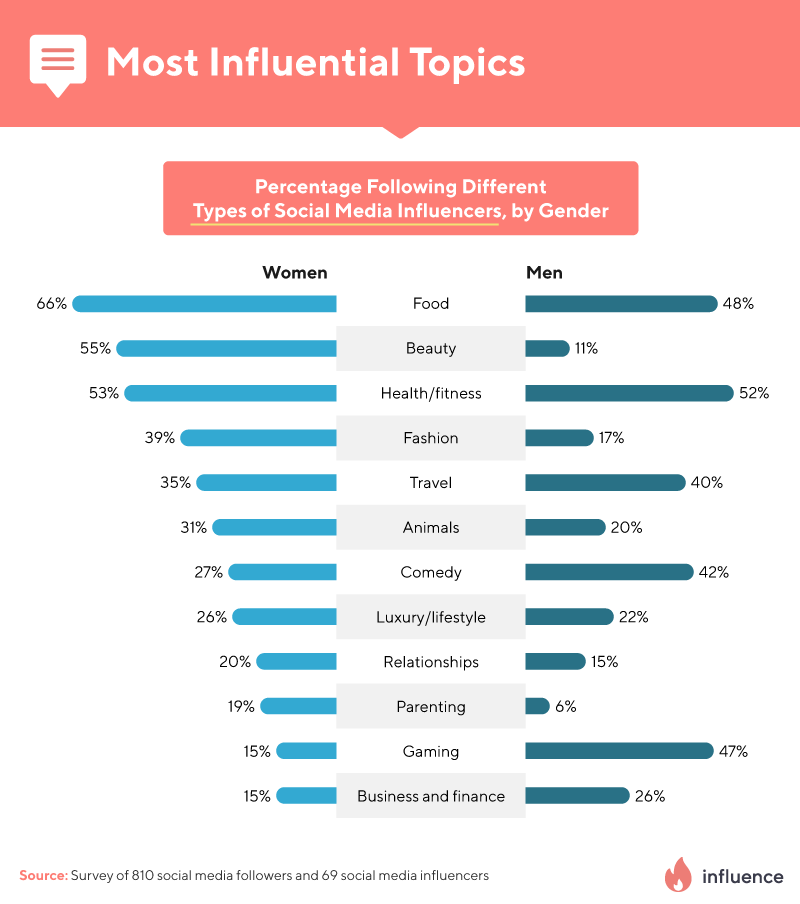 If you want to make an impression in the social media influencer sphere, there's no denying you'll have to put in the time. Being committed to the craft doesn't mean you have to give up your day job, though.

Overwhelmingly, Instagram was the most popular platform for influencers (88%), while others found ways to successfully monetize Facebook (14%), Pinterest (10%), and Twitter (9%). With over 1 billion active users, Instagram may not have the biggest audience, but its consistent growth keeps experts confident the image and video platform will continue to perform for businesses and influencers alike.

The term "influencer" may have made it into the mainstream, but for those looking to build their platform and capture audiences, the ins and outs of curating content and managing a brand are still largely misunderstood. Many users overestimated the amount of work it takes to maintain an influencer account and misjudged the most important components to make their profiles stand out, including authenticity, relevance, and unique content.

At Influence.co, we know building your brand is a journey, and you shouldn't have to do it alone. With peer networking and expert advice, we provide a completely free platform for promoting your content and finding like-minded accounts to connect and collaborate with. Learn more and start connecting at Influence.co today.

For this project, we surveyed 810 respondents and 69 social media influencers, for a total of 879 participants. Survey respondents were asked a series of questions about their perceptions of influencers. Influencers were asked similar questions to compare their results. Questions were distributed on Amazon Mechanical Turk.

There are some problems with self-reported surveys, including lying, selective memory, and exaggeration. To prevent this, an attention-check question was added. Survey respondents not properly answering the question were disqualified from the survey.

You don't need to be a celebrity influencer to help people learn more about managing their social media brands. Share the findings of this survey with your readers for any noncommercial use by including a link back to this page in your story.