Exploring Influencers and the Ethics Behind Their Sharing

You probably don’t have to scroll very far through your timeline in any one of the various social media platforms – Facebook, Instagram, Twitter, or Snapchat – to discover some kind of sponsored content. Even if it isn’t always appropriately labeled (which is should be), you might be able to call out sponsored posts from a mile away.

Cleverly positioned products in the middle of a clearly staged photograph might not even phase you anymore and that’s probably because influencer marketing is expected to reach a $15 billion industry by 2022. Perhaps originally styled after megastars like the Kardashians, the average brand spends 25% of its digital marketing budget on influencer content.

With so much money on the table and so little oversight into how influencers (some of whom are worth millions of dollars themselves) advertise for their sponsors, it’s almost no surprise that trust in social media stars is starting to wane. But even with a number of high-profile scandals to their names, the influencer business is still booming.

For a closer look at how Americans judge the ethics of the accounts they follow, we surveyed over 1,000 people familiar with various types of influencers. Read on as we break down how users feel about influencers advertising products they don’t use; how much info they should be required to share about their deals; and what happens when an influencer ends up linked to faulty or dangerous merchandise.

Influencers have a lot of leeway in how they choose to market and depict the products they advertise for brands. And while they may be encouraged to get as creative as possible with their content, it’s not exactly the Wild West in your social feed.

As the influencer industry has grown, the Federal Trade Commission has certainly taken notice of their marketing strategies. Now, instead of burying #AD at the bottom of a post, online influencers are required to mark sponsored content in a way that’s easily visible and simple to understand by all audiences.

Of course, that doesn’t mean they’re necessarily required to actually know anything about the products, services, or brands they’re recommending to their audiences. Sixty-one percent of people we polled, including 56% of millennials, agreed influencers should be required to personally research the products they frequently advertise on their platforms.

Unfortunately, that might be difficult if, as people we surveyed assumed, they don’t actually use those products in the first place. More than 12% of people believed influencers don’t use the products they promote at all, while more than 64% only slightly or somewhat believed they use those products. Just 6% of respondents told us they very much believe influencers truly use the merchandise they’re paid to advertise.

Repercussions for Their Actions

According to one report, more than 2 in 3 Instagram users (68%) log on specifically to interact with social media influencers. While spending too much time admiring overly edited content can be bad for our mental health, users we polled had certain guidelines to rate the behavior of accounts they follow. 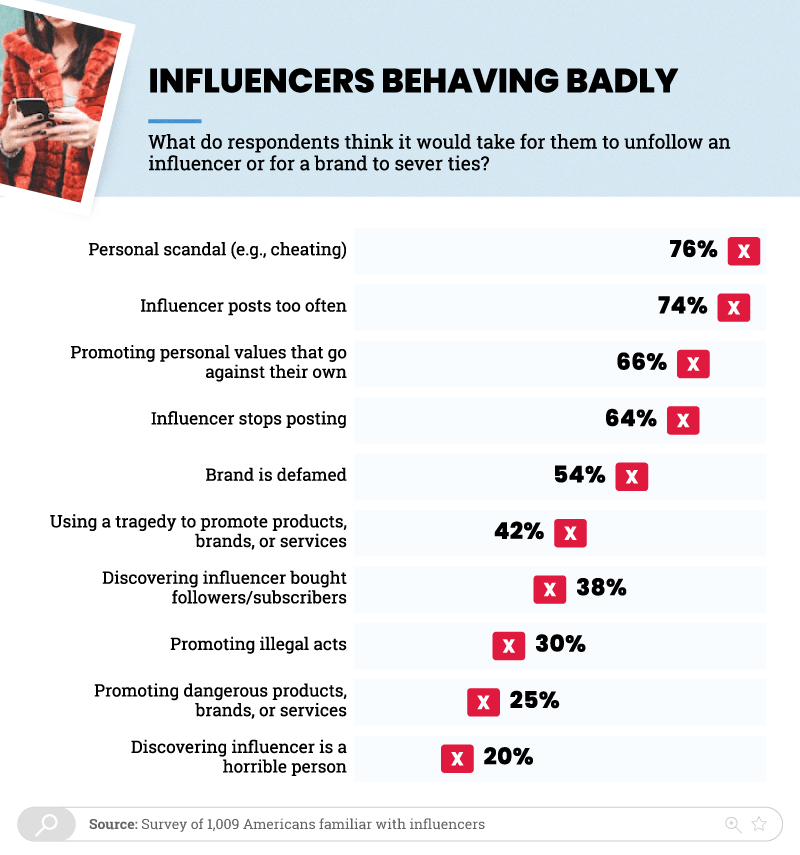 More than anything else, a personal scandal (like cheating) inspired 76% of users to unfollow an influencer’s account. After famous YouTube personality Logan Paul posted a video depicting a dead body in a Japanese “suicide forest,” he lost more than 6,000 subscribers in just one day. Seventy-four percent of users would unfollow an influencer who posts too regularly, and 66% would unfollow someone whose personal values didn’t align with their own. Less than 2 in 5 users would unfollow someone they caught buying subscribers or followers, promoting illegal behavior, or promoting something dangerous.

And the least compelling reason to exile an influencer off your social media feed? Finding out they were a horrible person in real life (20%).

Whether you like it or not, the title “influencer” is as much a job description as it is fodder for internet memes. For the millions of social media personalities who strike brand deals and exchange content for cash, being an online influencer is how they pay the bills. And while some may struggle with the ethical implications of either the title or the responsibility of their position, people we polled were quite clear on the behaviors they consider appropriate from influencers and the actions that could get them unfollowed. 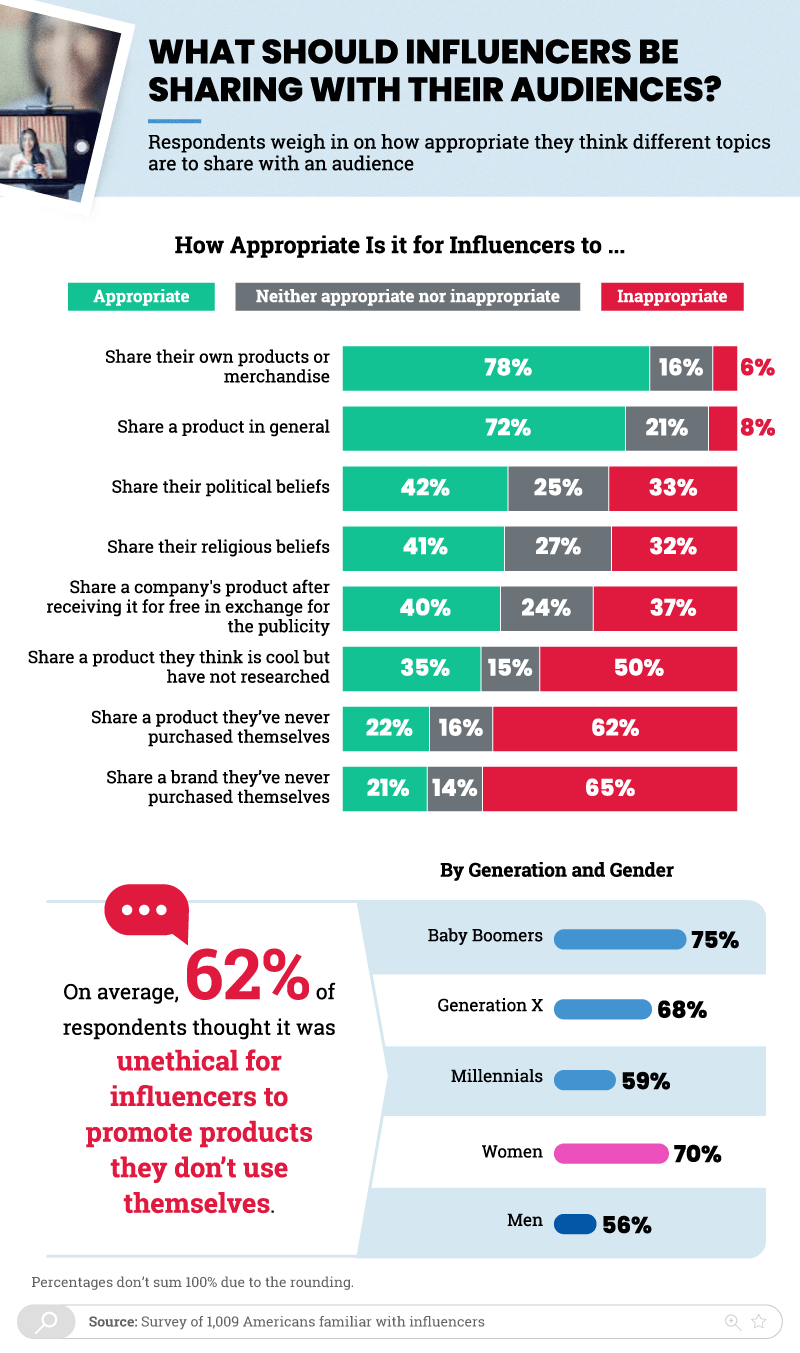 Overwhelmingly, more than 7 in 10 respondents identified influencers sharing their own products or merchandise (78%) or sharing a product in general (72%) as an appropriate action. Almost anything else, and users we polled were far less confident. Politics and religion may be taboo around some dinner tables, but these topics were rated as more appropriate (42%) than influencers sharing products (22%) or brands (21%) they’d never purchased.

Even if users sometimes see sponsored content as an untrustworthy behavior, influencers themselves see it as a business tactic – even if the advertisement isn’t real. Giving off the impression of having brand sponsorships creates a certain level of prestige, making an influencer seem desirable or successful. Even when they’ve paid for a product themselves, an influencer might lie and insinuate that the product was comped in order to appear more successful than they are. 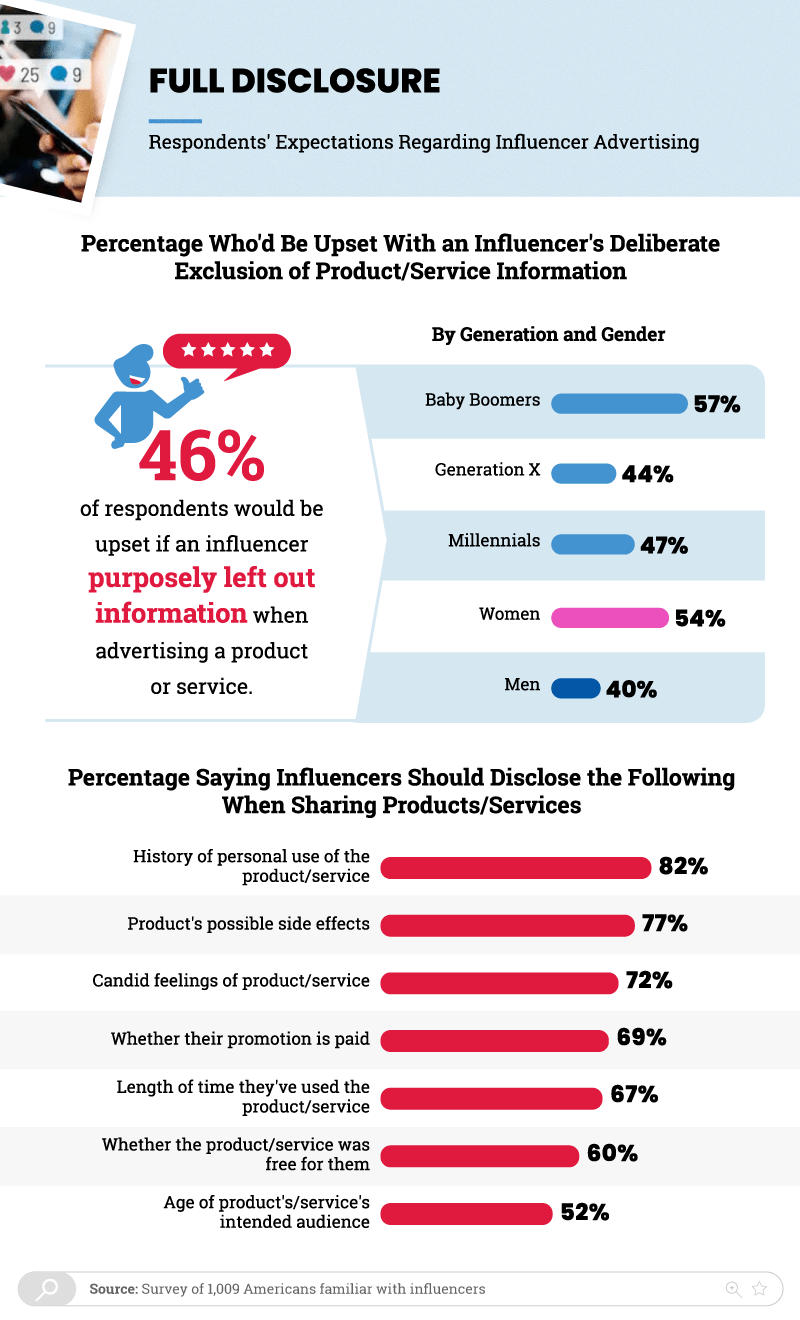 Beyond revealing when their content has been paid for or sponsored, there are very few additional regulations regarding the advertisements shared by influencers. Instead, 82% of users told us they want to know if influencers have actually used the products they recommend, while 77% believed they should be required to educate followers about any possible side effects. Sixty-six percent of users also suggested influencers with a younger audience were more responsible for the products they promote than other social media stars.

Although we might never get these details, 72% of users believed influencers should be required to share their honest opinions about products or brands.

In 2019, one of the biggest names in the YouTube beauty community, Jaclyn Hill, launched her own brand of lipsticks and promoted the products on her various social media channels. Just a few weeks later, fans and customers began to identify hair fibers, lumps, and small, black holes in their Jaclyn Hill cosmetics. After the scandal reached a fever pitch, Hill announced she’d be providing a full refund to all of her customers while continuing to suggest her products were safe to use. 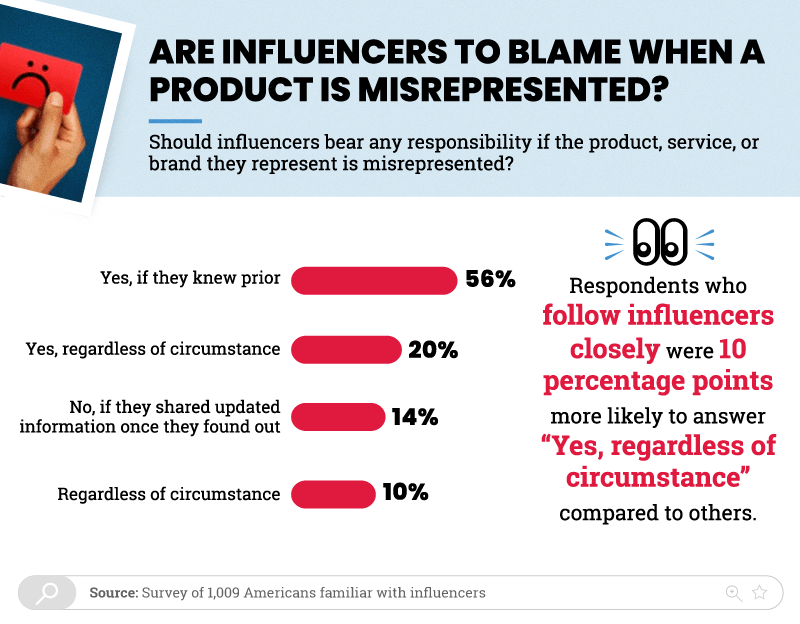 The more closely respondents followed certain influencers, the less forgiving they were of those who might market bad merchandise. A closer relationship to influencers online made users 10 percentage points more likely to say they should be held responsible regardless of the circumstances.

Instagram influencers may not be going away any time soon, but that doesn’t mean people are happy about their behavior. Social media users we surveyed were exceptionally critical of online influencers who don’t do enough to disclose the full details behind their sponsored content and especially so when they cater to a younger audience.

But as we found, as unethical as they might find some of their behaviors, it was harder to get people to commit to unfollowing influencers with shady pasts. Even if it became clear an online personality was a terrible person in real life, only 1 in 5 people would unfollow their account. Instead, major scandals were more likely to force their hands.

For this project, we collected responses from 1,009 respondents residing in the United States who were familiar with social media influencers. Participants who were not familiar with influencers were disqualified from taking this survey. Forty-eight percent of our survey respondents were male, and 52% were female. On average, respondent ages ranged from 18 to 76 years old. The average participant was 37 years old.

Our results rely on self-reported data which can be host to issues. Limitations included, but were not limited to, respondents telescoping, having selective memory, and exaggerating when responding to this survey.

Want to help share more insight into the wild world of online influencing? You don’t need to be a social media star to share this piece (for any noncommercial use), just add a link back to this page in your story for our contributors.